NextSpider-Man Homecoming thoughts, not a review – It is good, of course
Miscellany

I am making a summary and easy to understand explanation of why the “weather balloon” idea just does not work.

I have (common sense) proof that the Roswell incident of 1947 was a U.F.O. crash and that the “weather balloon” story was just a badly played cover up.

I don’t think what I am saying is completely original, but I am making a summary and easy to understand explanation of why the “weather balloon” idea just does not work.

First, let me say that Roswell is not what you think it is. I visited there last summer when I drove across country. If you’re like me, you have only seen Roswell on some TV shows covering the alien conspiracy or Ancient Aliens. They usually just show the “Downton Historic District” or the outskirts of town. So you think it is still this small old fashioned1940’s town with not much but a diner that has a sign welcoming the aliens. But Roswell has a population of around 48,000, close to the population of Niagara Falls NY. When I drove into town I was amazed that it looked like a “big city” with tall modern glass buildings and everything. I live near Youngstown OH and I compared it to that when I told people about it, but Roswell is about twice as big.

Of course, this got longer than I planned. You can just jump down to the “proof” section if you know the main story.

I’m sure everyone knows the story but…
An unidentified flying object crashed on a ranch northwest of Roswell, New Mexico, sometime during the first week of July 1947.

Rancher W.W. Brazel said later he found debris from the crash as he and the son of Floyd and Loretta Proctor rode their horses out to check on sheep after a fierce thunderstorm the night before. Brazel said that as they rode along, he began to notice unusual pieces of what seemed to be metal debris scattered over a large area. Upon further inspection, he said, he saw a shallow trench several hundred feet long had been gouged into the ground.

He reported the incident to the Chaves County Sheriff George Wilcox. The Sheriff did not know what the debris was. He then contacted the Roswell Army Air Field (RAAF) who sent out intelligence officer, Major Jesse Marcel, along with Captain Sheridan Cavitt with the Counter Intelligence Corps (CIC).

Soon the Sheriff’s office and area was full of Army personnel and the Sheriff and Fire Dept. were told not to go to the debris site and defer all further work to the Army.

The debris site was closed for several days while the wreckage was cleared.

On July 8, 1947, Roswell Army Air Field (RAAF) public information officer Walter Haut issued a press release stating that personnel from the field’s 509th Operations Group had recovered a “flying disc”, which had crashed on a ranch near Roswell.
Later that day, the press reported that Commanding General of the Eighth Air Force Roger Ramey had stated that a weather balloon was recovered by the RAAF personnel. A press conference was held, featuring debris (foil, rubber, and wood) said to be from the crashed object, which matched the weather balloon description.

The story pretty much died for about 30 years until other U.F.O stories started to become more common and popular.

Since then the military and government has been giving multiple confusing, conflicting, and outrageous explanations to hide the truth.

The “official” story now is that the debris was from a high altitude nuclear test monitoring program called Project Mogul. Part of this reasoning is that “the reflectors looked extremely odd, a geometrical hash of lightweight sticks and sharp angles made of metal foil. ..” and this is to explain why no one knew what it was.

According to Marcel, “I didn’t know what we were picking up,” he said. “I still don’t know what it was … It could not have been part of an aircraft, not part of any kind of weather balloon or experimental balloon … I’ve seen rockets … sent up at the White Sands Testing Grounds. It definitely was not part of an aircraft or missile or rocket.”
* Everyone (or most) who lived in this area was very familiar with weather balloons and other military equipment used in various test rockets and research. This stuff fell or landed in the area all the time. So the farmer, the Sheriff, AND especially the first military officer on the scene would not have been confused or so perplexed if it was just a weather or nuclear test balloon.

3a. Elaborating on the debris people saw and what was shown in the Air Force shown as evidence of the weather balloon: below are pictures of various weather balloons and Project Mogul. 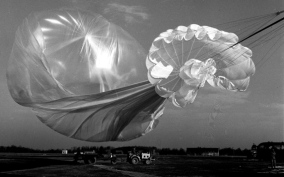 * As you can see, none of these balloons, platforms, or test equipment look very strange. They are not even very large. I showed one photo of a larger test platform to show the largest possible size of what the Air Force says could have crashed so you can see that even this would not leave a large debris field or look “unknown” to the people of Roswell. The second picture even shows the exact item that you see in the article photo and is the main “proof” the Army, Air force, or Government use to show as the weather balloon that came down. It certainly does not look strange or like it could make a large debris field.